You are here: Home / Research / Pulsars

Pulsars are compact, rotating neutron stars that act like cosmic lighthouses and emit regular radio pulses whose periods can be measured very precisely.

When a pulsar is found in a binary, it can be used as a test mass (with a precision clock attached) that free falls in the gravitational potential of the companion. This fall can then be compared with the predictions of GR, but also with any other theory of gravity. If the companion of the pulsar is a second neutron star, as in the “Hulse-Taylor” pulsar discovered in 1974 or in the double pulsar PSR J0737–3039 discovered in 2003, timing observations of such compact binaries (with semi-major axes of one solar radii and orbital periods of only a few hours), can be used for testing GR in the presence of strong gravitational fields with incomparable precision. 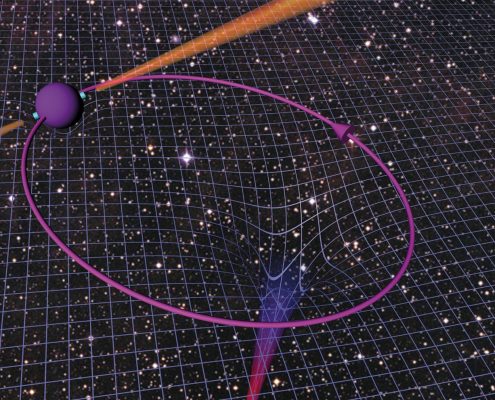 More specifically, in double neutron-stars or double pulsars systems, the pulse arrival times are modified by relativistic effects and these can be modeled with the so-called “post-Keplerian” (PK) parameters (in GR but also within any other theory of gravity). These PK parameters are phenomenological corrections to the Keplerian pulsar motion and the signal propagation, and describe, for instance, changes in the orientation and the period of the pulsar orbit, as well as additional delays in the pulses (like the Shapiro-delay), occurring as a result of the curvature of spacetime near the massive companion. Since these PK parameters are different in different theories of gravity, their measurement can be used to test GR and many of its alternatives.

Besides pulsar binaries, some of the most stringent pulsar-based tests of GR and alternative theories are actually expected from a pulsar orbiting a BH. In such a case, we would not only expect the largest deviations from GR, at least for certain alternatives to GR, but we could also measure the BH properties, such as mass, spin and quadrupole moment, leading to a clean test of the no-hair theorem.

Although pulsar-BH systems can provide unique benchmarks of theories of gravity, they are expected to be very rare and to date not a single pulsar-BH system has yet been found. In addition, since the effects related to the quadrupole moment scale with the third power of the BH mass, they are still extremely difficult to measure in the case of stellar mass BHs. A pulsar-SMBH binary, on the other hand, would be a perfect target for such tests. Luckily, the prospects of finding such a system can increase enormously near the Galactic center, where a large number of pulsars are expected to be orbiting Sgr A*.

One of the main goals of the BlackHoleCam project is to detect and characterize such pulsars.