Radio interferometry is an astronomical observing technique to obtain high-resolution images of radio sources. In particular, VLBI (very long baseline interferometry) uses a global network of radio telescopes spread across different continents to form a virtual Earth-sized telescope. The radio wave signals emitted by e.g. the hot plasma surrounding the black hole are recorded separately at the individual telescopes. Afterwards, the signals are cross-correlated for all pairs of antennas at a central location, e.g. at the Max Planck Institute for Radio Astronomy in Bonn, Germany or MIT Haystack Observatory in Westford, MA, USA. With the correlated signals measured on each baseline (the imaginary line connecting the two telescopes as seen from the observed source), an image of the emission surrounding the black hole can eventually be reconstructed.

The short baselines between telescopes located closely together give information about the large-scale structure of the source, and the long baselines between telescopes located far away from each other sample the detailed small-scale structure of the source. The larger the separation between the telescopes (or the longer the baseline), the higher is the resolving power. In order to reconstruct a high-fidelity image of the source, a VLBI array should include as many stations as possible and the resulting baselines should include both east-west and north-south orientations across different continents (as shown in the image). A VLBI observation is always performed for several hours so that the Earth rotates during the observations, changing the baselines as seen from the source, so that as many components of the source structure as possible can be sampled. The angular resolution of the VLBI array not only increases with the distance between the telescopes, but also with the frequency of the observed radiation. At frequencies of about 230 GHz, corresponding of a wavelength of 1.3 mm, Earth-size baselines correspond to an angular resolution of tens of microarcseconds, which is comparable to the size of an apple on the Moon. This is the highest angular resolution ever achieved in ground-based astronomy, and it allows us to observe supermassive black holes such as Sgr A* and M87 on scales comparable to the Event Horizon.

In order to interpret the reconstructed image of a black hole, it is important to simulate VLBI observations. With VLBI simulation software (e.g. MAPS, eht-imaging, MeqSilhouette), we can generate mock data for a given input black hole model image or movie and specified locations and properties of the telescopes. The effects of different signal corruptions due to e.g. water vapor in the atmosphere, telescope pointing errors, or instrumental noise can be added to the simulated data in order to obtain a realistic observation. An image can then be reconstructed from the simulated data, which will give us an idea of the image quality we can hope to achieve. Datasets can be simulated for different black hole models, which may include different black hole masses, spins, temperature prescriptions of the radiating plasma surrounding the black hole, viewing angles, or orientations on the sky. Simulated data sets of different models may then be compared to the observational data in order to determine which model is the best description of the observed black hole. These models are usually GRMHD simulations. 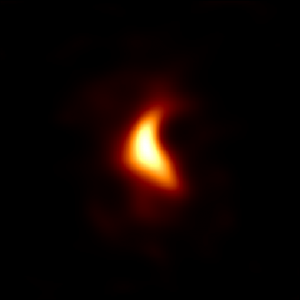 Reconstructed image of the GRMHD movie below observed for 8 days with the simulated Event Horizon Telescope array.

The movie below shows an example of such a GRMHD simulation for Sgr A*, where the turbulent plasma is orbiting the black hole on time scales of a few minutes (credit: Hotaka Shiokawa). This short-term variability poses a challenge for the image reconstruction, as it takes a few hours to conduct a VLBI observation. Like with an ordinary camera photographing a fast moving object with a long exposure time, this may seriously degrade the image quality. However, using some tricks, such as observing the source for multiple days and averaging the resulting data sets, we can still obtain a high-fidelity image of the black hole shadow. The lower image was reconstructed from simulated data of this GRMHD movie using a simulated observation with the Event Horizon Telescope array. This simulated observation was performed with the program MAPS, but in the future we plan to perform simulations with MeqSilhouette, which is currently under development and will contain more realistic signal corruption effects.