Heino Falcke and Remo Tilanus flew to France in February to meet with Director Karl Schuster and scientific and operational staff members of IRAM. In addition to collaboration and technical discussions a visit to NOEMA was also part of the agenda. Headquartered in Grenoble, IRAM is an international research institute for radio astronomy that operates two (sub)mm telescopes: the NOEMA interferometer array on Plateau de Bure (France) and the single-dish 30M telescope on Pico Veleta (Spain). The institute was a pioneer for ALMA and the Event Horizon Telescope and carried out the 1st VLBI (Very-long-baseline interferometry) observations at 1mm in 1995 to successfully detect Galactic center event horizon emission.

NOEMA is the successor of the Plateau du Bure interferometer and currently in the process of increasing its number of telescopes from 6 to 12 as well as making substantial improvements to its sensitivity[1]. It is the most powerful millimeter interferometer of the Northern Hemisphere and one of the most advanced facilities existing today for high-frequency radio astronomy. Plateau de Bure located in the French Alps at an elevation of 2550 meters and the interferometer currently consists of nine antennas, each 15 meters in diameter, with number 10 under construction.

Plateau de Bure is a spectacular mountain site with, at times, very harsh weather conditions and icy winds up to 100km/h that can make working there a challenge and travel to it rather adventurous. To avoid a long hike, possibly through deep snow, staff and visitors typically use a 4-kilometer-long cable car. However, Heino and Remo were lucky since the cable car was down for maintenance and together with their hosts instead were taken to the plateau by helicopter, giving them a spectacular view of the mountain range and NOEMA. Heino and Remo witnessed the ongoing installation process of antenna number 10 in the large assembly building. NOEMA staff was in the process of finishing the cladded backup structure consisting of a mix of steel and carbon fiber struts on which they then will mount the panels. The “big ass fan” on the ceiling is needed though to reduce temperature gradients in the large building. The heart of a radio-astronomy interferometer is the correlator, which combines the signals from all telescopes to create the actual image. Our European Research Council funded BlackHoleCam project is contributing to and collaborating with the IRAM staff on the design and installation of special hardware and software on the correlator to make NOEMA one of the most sensitive stations of the Event Horizon Telescope VLBI array.

While being on the plateau, Heino and Remo used the opportunity to visit the memorial for the unsung heroes of sciences who tragically died during a cable car crash on July 1st, 1999. A local artist, a relative of one of the victims, created the memorial.

In case of questions, please reach out to: 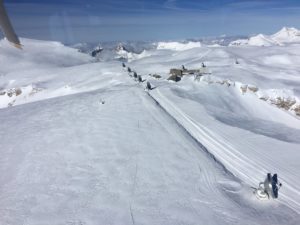 View from the helicopter 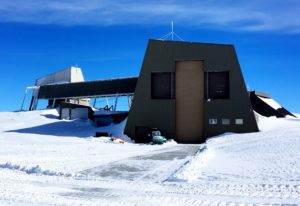 New antennas are assembled and maintained on the mountain in this large building, where antennas can be brought in and out via rails. 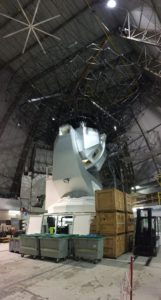 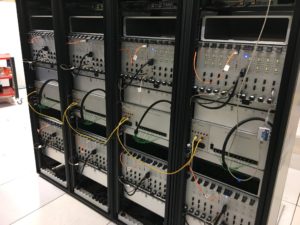 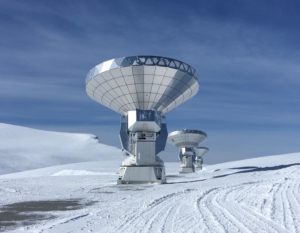 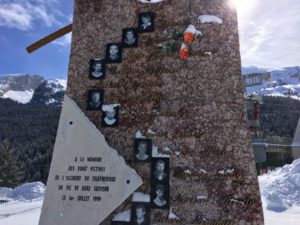 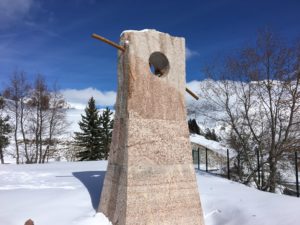